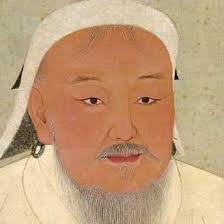 The name Genghis Khan evokes images of bloodlust, the likes of which this world has seldom seen. Entire cities were wiped out by his marauding soldiers as they swept from the steppes of Mongolia, across the Volga River to Russia, Eastern Europe and the Middle East in the 1100s and 1200s.

Millions died under the sword of his men, yet the positive aspects of Genghis Khan’s military conquests are often overlooked: he unified most of Asia under a single political code and opened up the Silk Road for trade and commerce, thus ushering in a new age of enlightenment. He was tolerant of all religions and applied the Mongolian civil code – the Yassa – equally to all subjects. Conquered soldiers were generally integrated into his own forces, and orphaned children were adopted by Mongolian families. He placed absolute trust in his generals, who were given wide autonomy in their military campaigns.

Genghis Khan was able to summon an army of 100,000 men at a few days’ notice. The battalions were divided into units of 10, making up larger battalions of 100 men, and then 1,000, each smaller unit headed by an officer responsible for the welfare and training of his men. Khan was able to defeat much larger armies due to the speed of his attack, and the ability of these small military units to break off and rejoin the larger army depending on the military tactics being deployed. Though his soldiers were highly trained in horsemanship, archery and military tactics, they were not subject to the kind of demeaning military discipline evident in the enemy armies.

Genghis Khan was without doubt one of history’s most brutal warlords, but he was also a military strategists and organiser without equal. His empire extended across half of the known world. One of his rules was quite stunningly brutal: never make peace with an enemy before they have submitted. It seems perhaps strange that we should invoke the Great Khan for lessons in organisation, but hang in there a moment.

He was indeed a great organiser, so what was it about his leadership style that made him so effective?

“In truth, the success of any organisation is all about its people. Hire the right people, those with a proven history of getting the job done, and the rest is easy. In identifying the right candidates for the job, PCS goes the extra mile to establish their actual production record, based on measurable stats and milestones.”