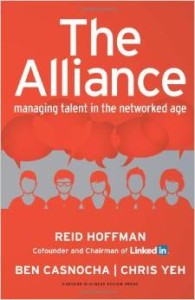 Reid Hoffmann is the celebrity co-author of this book, The Alliance, which points to a changing employment landscape. Gone are the days of life-long employment. In its place is a more flexible and transient arrangement.

Hoffmann, by the way, is the founded of LinkedIn. He previously worked with Apple and Paypal before launching LinkedIn. He gives an insight into the changing face of modern recruitment: when LinkedIn is looking for new staff, the question it asks is where the candidate wants to work once they leave LinkedIn.

The assumption is that staff will want to move on at some point. Aa Hoffmann explains, Google, eBay and a few other Silicon Valley companies understand this new way of doing things. Both managers and employers often see an engagement as a three-to-five year “tour of duty.”

We have moved from an “era of lifetime employment”, the authors say, to a “free-agency-style” per­iod. They remind us that we can no longer ex­pect to join a company and be set up with a career for life, working for the same organisation from when we leave education un­til we retire.

From their perch in Silicon Valley, where competition for the brightest and best employees often seems like a blood sport, this view is a reality. Engineers are so highly prized that not only are youthful developers able to command salaries that few entry-level emp­loyees can muster in other industries, but chief executives go to extraordinary lengths to hire them.

One founder of a well-known start-up told me he spent four months cultivating just one employee. Beyond the salary and equity on offer, he spent time with the potential recruit and his family go­ing so far as to drive his wife and children to football practice, all in the hope of convincing the engineer to join his start-up (he did).

While the authors ac­know­ledge that not all ind­ustries are evolving as fast as the tech sector, they believe many are having to cope with rapid change.

The clue is in the title: The Alliance argues for a new relationship that is not based solely on “a legal and binding contract” between company and worker but more on a “relational approach. Think of employment as an alliance: a mutually beneficial deal, with ex­plicit terms, between independent players.”

Employees are as much in control of a relationship as employers, say the authors, and managers must embrace this fact. The authors say this requires honest and continuing conversations bet­ween manager and managed to define the parameters of the relationship and en­sure it evolves in a way both parties ac­cept. “This can even inc­lude ac­cepting that a valued emp­loyee may choose to leave the company – but having an open conversation means a manager can get the most out of the person before they quit. And an employee who leaves on good terms is more likely to bring business back to the company,” according to the Financial Times, which believes the book should delve deeper for more insights into this ever-changing relationship between employed and employer.

Still, there are some very useful ideas for companies facing the same dilemma – how to get the best talent and then retain them. Alternatively, plan their operations around an increasingly mobile and fleet-footed workforce.