Book review: Zero to one by Peter Thiel 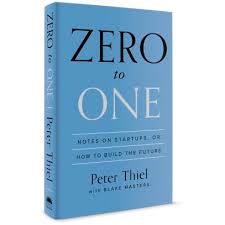 Renowned entrepreneur Peter Thiel is worth listening to. He is a founder of PayPal and the data analytics firm Palantir, and has some refreshing ideas for entrepreneurs and those who want to get ahead in life.

Here’s the one stand-out idea from Thiel: if you want to start a business, make it a monopoly. “Competition is for losers,” he declares. Companies like Google and Facebook are essentially monopolies. What competition they do have is almost irrelevant.  The idea should be so unique that the competition is always 20 steps behind.

“The perfect target market for a start-up is a small group of particular people concentrated in a group but served by few or no competitors,” Thiel writes. Lots of tech hits, like Facebook and PayPal, were launched in small communities of power users. These early adopters tested the product, identified early bugs, and helped to spread the word when the company expanded. An online yearbook for Harvard students might not strike you as a $100 billion idea. But today Facebook is a $200 billion company, because Mark Zuckerberg established monopolistic fiefdoms at colleges before expanding to take over the world.

Thiel is not suggesting that capitalism is bad. He’s saying that, precisely because capitalism is wonderful for consumers, it’s hell for companies. Truly competitive industries, like restaurants, see their profits gobbled by rivals and fickle eaters. Every start-up must begin small before getting big. Entrepreneurs should at first seek to dominate a small market. In other words: They should try to build a mini-monopoly.

Like South African entrepreneur Elon Musk (founder of Tesla Motors), Thiel is involved in cutting edge technologies where he puts his monopolistic ambitions to work: he is invested in an anti-aging biotech firm, building ocean communities underwater, and a foundation that pays teenagers to drop out of college and start new companies. “Say what you want about the Thielian future of cyborg teenagers living for 200 years in pressurised cabins under the Caribbean; this is not a man to be faulted for thinking too small,” according to The Atlantic.

So it’s surprising in a wonderful way just how simple Zero to One feels. Barely 200 pages long, and well lit by clear prose and pithy aphorisms, Thiel’s has written a perfectly tweetable treatise and a relentlessly thought-provoking handbook.

Thiel arrived in Silicon Valley in 1985. After two tours of duty at Stanford (which did little to dissuade him of the notion that college is a waste of time) he founded PayPal (then “Confinity”) with a group of friends in 1998. Two years later, at the pinnacle of the dot-com bubble, he merged his business with Elon Musk, perhaps the Valley’s most celebrated polymath, who happened to starting a similar company, X.com, just blocks away.

The crash left an intellectual hangover in the technology space, Thiel says. The founders who survived the deluge clung to four principles: 1) Be humble and make incremental advances; 2) Stay lean and experiment agnostically; 3) Don’t try to create new markets all of a sudden; 4) Focus on product, not sales. But those who misremember history are doomed to repeat it. “The opposite principles are probably more correct,” Thiel says. Start-ups should be bold, have a clear plan, try to build a small monopoly, and appreciate that sales matter as much as product.

The reason small start-up companies fail is they tend to ignore these simple common-sense rules. Tech companies in particular tend to be dismissive of sales. Thiel says you have to get out there and make your product known or it will fizzle out quickly. There are some great ideas here for entrepreneurs who have been sitting on ideas for years, waiting to be discovered. This book may be the inspiration they are looking for.