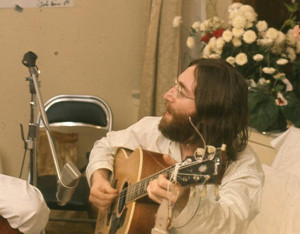 John Lennon first met Paul McCartney in Liverpool on the 6th July 1957 when John was fronting The Quarrymen. The two were introduced to each other by Ivan Vaughan, then the bass player for The Quarrymen. McCartney showed Lennon how to tune his guitar and sang some songs by Gene Vincent and Little Richard, songs that The Quarrymen had been struggling to master. Lennon was both impressed with, and challenged by, McCartney. The feeling was mutual. McCartney later wrote that he was amazed by Lennon’s singing style and presence as a front man.

Lennon and his band mates debated whether to admit a potential virtuoso to their ranks, one that might challenge Lennon’s leadership and out-shine their (then) limited musical skills. The rest is history. McCartney was invited to join the band and The Quarrymen transformed into The Beatles, kicking off the most successful song-writing collaboration in musical history.

This is just one example of a chance encounter that changed the world.

Steve Jobs met Apple co-founder Steve Wozniak in 1970 through a mutual friend, Bill Fernandez. They later became friends when both Jobs and Wozniak worked at Hewlett-Packard for a spell. Jobs and Wozniak were members of the Homebrew Computer Club in Palo Alto, California, where hobbyists would try to impress each other with their home-developed computers. In 1976 Wozniak designed the hardware, circuit boards and operating system for the computer that became known as the Apple I. Jobs convinced Wozniak to sell the Apple I as a fully assembled printed circuit board. Wozniak sold his HP scientific calculator, and Job’s sold his VW van, to raise US$1,300 to launch the company, which started – like all great high-tech start-ups – in Jobs’ garage. Apple is today the world’s most highly valued company, with a market valuation of US$416 billion.

Such chance encounters as these might never have happened had McCartney not turned up to see The Quarrymen play in 1957, or had Jobs been a recluse. Had these meetings not happened, history would have taken a different course. There would be no Sgt.  Peppers or White Album, no iPhone or iPad.

[blockquote source=”Philip Park, MD of Professional Career Services”]Try to set some time aside each week to get out of the office and meet some new people. Who knows what will come of these chance encounters[/blockquote]

In the book “The Power of Pull: How Small Moves, Smartly Made, Can Set Big Things In Motion”, the authors John Hagel, John Seely Brown and Lang Davison make a powerful case for social networking. For example, they detail how Yossi Vardi, the grandfather of Israel’s venture capital industry, attends 40 conferences and pow-wows a year. That allows him to meet movers and shakers from around the world, and gives him a front seat in the war of ideas.

The authors argue in favour of arranging your life to increase the likelihood of chance encounters of the Lennon-McCartney kind. While Google is a wonderful tool for finding just about everything, there is no substitute for getting out of the office and meeting people – be it through conferences, dinners, or simply launching into a random conversation with someone in the bank queue. What you learn through personal interaction, Google cannot hope to match.

Americans are probably far better at this than we South Africans, who have tended to inherit the English reserve. We consider it impolite to crash the social ice block that we erect around ourselves for whatever silly reasons. I much prefer the American way in this regard. I have generally found that people in high positions are extremely social and willing to engage in conversation. They are, by nature, inquisitive and eager to listen.

So try to set some time aside each week to get out of the office and meet some new people. Who knows what will come of these chance encounters.