Companies that glow have employees that shine 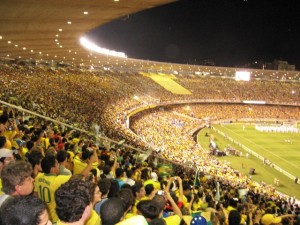 How to get the most out of your employees? The truth is that companies that shine have employees that glow.

With the Brazil World Cup 2014 behind us, it was fascinating to watch the difference in the quality of football as the tournament progressed. Germany’s 7-1 thrashing of Brazil was a surreal moment. Here was a team with no Ronaldo, or Rooney or Soares. It had none of the superstars that make the headlines and command such outrageous player fees – yet it ripped the heart out of the Brazilian team.

What we witnessed was a well-drilled team of quality players who had been trained to win – and to win emphatically. This was no overnight achievement. German coach Joachim Low  (pictured below, right) spent years coaching and drilling his team to outshine the rest of the world. This meant planning for every conceivable form of attack, to exploit every opening and to score given the slightest glimpse of a goal.

The business world is no different. Ray Silverstein, writing in Entrepreneur magazine, makes the point that being “average” isn’t good enough any more. “Not in this competitive environment. Not in this lagging economy. If you accept average performance from your employees, you’re doing your company a huge disservice.”

Every business manager and entrepreneur is searching for the alchemy that will make the business shine.

“So why is it then that so many of us mutely accept mediocre performance?” asks Silverstein. Perhaps because raising the bar isn’t easy. Taking corrective action can be unpleasant. And if you haven’t done any of this before, it may not be clear how or where to begin.”

Here are five steps that can be taken quickly to turn around a failing enterprise:

It’s a hard point for most managers to confront but only 20% of employees are strong performers. These are doing fine so don’t waste your time fixing what isn’t broken. The next 60% are “average” performers and the last 20% are the weakest – this is your most dangerous group.

“The good news is you can kill two birds with one stone. Research has shown that when you start vigorously managing your weakest employees, it makes the biggest impact on your next group up – namely, your average workers,” says Silverstein.

If you aren’t taking action against underperforming employees – employees who aren’t productive, who come in late and waste time or perhaps don’t come in at all–what message does that send to the average worker?

It tells them that there are no consequences for poor performance. Remember, your employees are well aware of one another’s behaviour, even if management pretends not to notice. This fosters a culture of apathy and negativity that drags everyone down.

It may be that they don’t know what it is they should be doing. Train them, and train them well. There may be some home situation that is distracting them. Dig in and find out what it is. An alcohol or drug problem? Some companies take a zero tolerance view of drug and alcohol abuse. Others take a more humane view and assist with rehabilitation. Either way, drug and alcohol abuse is a problem in many companies that must be addressed. If employee under-performance is the result of insufficient training and experience, get your employees trained.

There are a number of ways to manage poorly performing employees. Start by creating job descriptions and performance standards for everyone – a step many small employers wrongly overlook.

Nothing works like positive validation for those who exceed expectations. This need not always be monetary reward. Hold monthly awards events for the top performing staff, give them a certificate (and yes, an award) and make a big deal out of it. This sends a powerful message to the slackers that this is where you have placed the bar.

“Neutron Jack” Welch, the former CEO of General Electric, is famous for his extreme managerial practices. In the 1980s, Welch insisted that each year, every department manager rank his or her personnel and eliminate the bottom 10 percent of workers. His theory was that it raises performance expectations and keeps everyone, even stellar employees, on their toes. Fear of losing one’s job is powerful motivation.

“While Welch’s practice was radical, it’s also radical – dangerously so – to keep non-performers on board. Plain and simple, they are hurting your business! Cut them loose, and you’ll send ripples throughout your organisation, shaking up other non-performers and prodding average employees to aim higher. As a bonus, you’ll boost morale among your top performers, because it shows that you’re paying attention and that you value good work,” according to Silverstein.

According to an old Icelandic proverb, “Mediocrity is climbing molehills without sweating.” If you want to climb mountains, not molehills, develop a zero tolerance for mediocrity. Use the 20-60-20 percent rule to keep your employees moving upward.