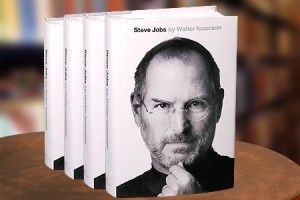 Apple co-founder, the late Steve Jobs, was both an artist and a business visionary. He succeeded in making “a dent in the universe” as he many times promised he would. Walter Isaacson’s biography of Steve Jobs is one of the most widely read of any modern business leader. Business students have scoured these pages looking for insights into the man’s unique alchemy, his business style, his creative genius. Yet Jobs remains frustratingly enigmatic.

He was brusque, often cruel, often kind and compassionate, generous, impatient and sometimes brutal. Rather like Keith Richards’ description of his Rolling Stones band mate Mick Jagger: “He’s a wonderful bunch of blokes.” Jobs was all of this, and more.

He once said that “customers don’t know what they want until we’ve shown them.”

Part of Jobs’ genius was his ability to swim against the tide, and win. At a time when outsourcing “non-core” functions was received wisdom in business, Apple did the reverse: it opened its own stores to fully control the supply chain. Jobs shunned partnerships unless they were absolutely necessary. He insisted on having full control over design, production, sales, marketing, distribution and customers. Jobs also obsessed about the small details, such as the type of font being used in his products, or the shade of colours. Apple was unashamedly pitched at the high end of the market, and Jobs made no apology for this.

Apple, despite some wobbly patches along the way, is now the most highly valued company in the world. Jobs co-founded Apple in the late 1970s with his partner Steve Wozniak and launched one of the first commercially successful personal computers, the Apple II series, followed by the Macintosh. His abrasive manner eventually led to a clash with his board of directors, and he left the company in 1985 to pursue a variety of other business interests, including the acquisition of animated film company Pixar.

In 1996 he returned to Apple as advisor and later CEO, and helped rescue it from the brink of bankruptcy. It was the start of Apple’s golden age.

Isaacson’s biography of Jobs is a fascinating study of one of the most interesting business minds of this or any other age. It details his pilgrimage to India in 1974, his life-long devotion to Zen Buddhism, his experimentation with LSD and his “hippie” roots. This is a book you will want to come back to time and time again, when the inspiration runs dry or you hit a dead end. Jobs had many highs and lows in his life, but he triumphed through sheer doggedness and a belief in the marriage of art and technology.