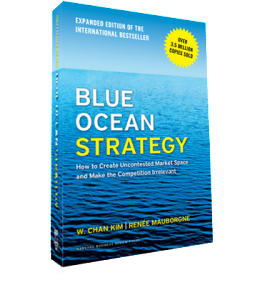 Earlier we reviewed the book Zero to One by Peter Thiel who argues that if you want to start a business, make it a monopoly. “Competition is for losers,” he claims.

Well, here’s another book with a similar theme. The book is Blue Ocean Strategy, by W. Chan Kim and Renée Mauborgne, who argue that “cutthroat competition results in nothing but a bloody red ocean of rivals fighting over a shrinking profit pool.”

This conclusion is based on a study of 150 strategic moves (spanning more than 100 years across 30 industries). The authors say lasting success comes not from battling competitors but from creating “blue oceans” – untapped new market spaces ripe for growth.

A great example of this is Cirque du Soleil, the Canadian (and now international) mixture of art and circus. Cirque’s model was to create a circus so different from anything already existing that it would have no competition. That’s exactly what happened. Another example is Southwest Airlines in the US which decided to offer an alternative to those travelling by car between cities in the US. It did this by introducing frequent flights, quick check-ins and low prices. The strategy was a runaway success – again, it created what the authors say is a “blue ocean” where Southwest was the lone whale swimming among minnows.

The book urges companies to search for ways to gain uncontested market space rather than engaging in traditional competition.

To support their theory, the authors invite readers to consider the business climate of 20 years ago, and the numerous new business opportunities that have arisen since then.

“How many industries that are unknown today will exist [in the future]?” Kim and Mauborgne wrote in the Harvard Business Review. “If history is any predictor … the answer is many. Companies have a huge capacity to create new industries and re-create existing ones, a fact that is reflected in the deep changes that have been necessary in the way industries are classified.”

The authors say that blue ocean strategy is successful because it simultaneously attracts large numbers of customers while raising the cost of competition.

“When imitation requires companies to make changes to their whole system of activities, organizational politics may impede a would-be competitor’s ability to switch to the divergent business model of a blue ocean strategy,” Kim and Mauborgne wrote.

The book offers businesses and entrepreneurs the framework and the tools for creating and capturing “blue oceans,” including a strategy canvas, value curve, four actions framework, six paths, buyer experience cycle, buyer utility map and blue ocean idea index.These visual frameworks and tools are designed to not only effectively grow the collective wisdom of a company, but also facilitate effective strategy execution through fluid communication.

To discover an elusive blue ocean, Kim and Mauborgne argue that businesses and entrepreneurs should consider what the authors call the “Four Actions Framework.” This is used to reconstruct buyer value elements in crafting a new value curve. To break the trade-off between differentiation and low cost, and to create a new value curve, the framework poses four key questions:

Kim and Mauborgne said that this exercise forces companies to scrutinize every factor of competition, helping leaders discover the range of assumptions they unconsciously make while competing. This exercise also pushes leaders to simultaneously pursue differentiation and low cost in order to break the value-cost trade-off. The questions also spotlight companies that are focused only on raising and creating, in the process lifting the cost structure and often over-engineering products and services.