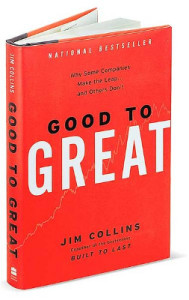 Good to Great is not a new book, but it’s a timeless classic for those who want to understand alchemy of business success.  Collins defines greatness as financial performance several multiples better than the market average over a sustained period.

He distils the recipe for greatness down to a single axiom: find what you’re good at and focus on that, rather than a dozen things you’re not so good at. In modern business language, we understand this as focusing on your field of competence.

One critical aspect of success that is too frequently overlooked: the book says you need to hire the right people, and place them in the right positions.

All this may be self-evident to a great many business leaders, but it is amazing how many businesses get caught up in the quest for growth, entering new markets they know little or nothing about, or simply chasing short-term financial gain to please the investors.

Collins used a large team of researchers who studied 6,000 articles, generated more than 2,000 pages of interview transcripts and created 384 megabytes of computer data in a five-year project. The book was cited by several Wall Street executives as the best business book they had ever read.

[well]He distils the recipe for greatness down to a single axiom: find what you’re good at and focus on that, rather than a dozen things you’re not so good at. In modern business language, we understand this as focusing on your field of competence.[/well]

Of course, there is more to greatness than simply focusing on what you are good at. Great companies need leaders who are passionate about pursuing a vision, and less concerned about this quarter’s financial results. A second ingredient for greatness is – wait for it – choosing the right people, and then slotting them into the right positions where their natural or trained talents can flourish. Another element is the ability to face the brutal truth about the company’s current circumstance. Collins introduces the concept of the “flywheel”, where dozens of small initiatives feed off each other and build forward momentum, creating a compounding effect.

Collins is no great fan of the business change industry, and in a recent article debunks several myths about business:

The Myth of the Change Program: This approach comes with the launch event, the tag line, and the cascading activities.

The Myth of the Burning Platform: This one says that change starts only when there’s a crisis that persuades “unmotivated” employees to accept the need for change.

The Myth of Stock Options: Stock options, high salaries, and bonuses are incentives that grease the wheels of change.

The Myth of Fear-Driven Change: The fear of being left behind, the fear of watching others win, the fear of presiding over monumental failure—all are drivers of change, we’re told.

The Myth of Technology-Driven Change: The breakthrough that you’re looking for can be achieved by using technology to leapfrog the competition.

The Myth of Revolution: Big change has to be wrenching, extreme, painful—one big, discontinuous, shattering break.

“Companies that make the change from good to great have no name for their transformation—and absolutely no program. They neither rant nor rave about a crisis—and they don’t manufacture one where none exists. They don’t ‘motivate’ people—their people are self-motivated. There’s no evidence of a connection between money and change mastery. And fear doesn’t drive change—but it does perpetuate mediocrity. Nor can acquisitions provide a stimulus for greatness: Two mediocrities never make one great company. Technology is certainly important—but it comes into play only after change has already begun. And as for the final myth, dramatic results do not come from dramatic process—not if you want them to last, anyway. A serious revolution, one that feels like a revolution to those going through it, is highly unlikely to bring about a sustainable leap from being good to being great.”

After scouring 1,435 companies, Collins and his team settled on 11 companies that made the leap from mediocre to great. How great? These companies delivered more than three times the market returns of the stock market average over 15 years.

The bottom line: greatness come from recognising what the company is best at, hiring the right people, and then making gradual improvements that compound into a massive change in momentum.